SANTA'S LIQUID LUNCH (a.k.a. A Harrowing Break from a Holiday Job) 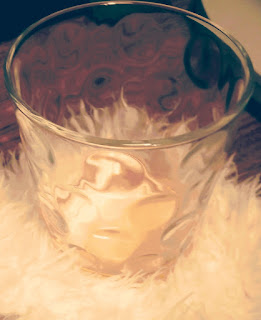 The girl found me out. I thought I had managed to hide away in this brown and beige bar round the corner from where I was supposed to be. The place was squat and stank more of lacquer than liquor but I liked it just fine. Not a goddamn Christmas decoration in sight. Still I suppose it being the only place in the mall not lit up and draped in green tinsel, I made it kind of easy to find me.

She stopped beside my bar stool and folded her arms.
"Santa," she said, "You've gotta go back now."
Craning my neck, I could just see that there was a line developing from the grotto. "Has the creepy kid left?"
"A while back."
"I mean the building."
The girl sighed. "Short of checking with security I wouldn't really know, now would I?"
This was the mouthiest teenage elf I had ever worked with. She had bright red chipmunk cheeks and little black eyes that looked constantly bored. Still her ears were naturally pointy so I suppose she had rare qualifications.
The bartender laid down a neat bourbon for me right on where my fake beard met the bar.
"Whiskey for your whiskers," he joked. I forgot to laugh.
The elf girl cleared her throat.
"I'll admit what that little boy said was unsettling but there are also normal kids about to lose their shit over there."
I threw back the bourbon.
"Please don't be that guy."
I leaned back on the bar. "Which guy would that be?"
"Another half-in-the-bag Mall Santa."
I tapped the counter and got the bartender’s attention. He was still chuckling to himself at his little joke. Getting in the spirit of the season I wouldn’t wonder. Glad someone still could.
I glared at the elf girl. My eyes were probably bloodshot but I just didn’t give a rat’s ass. "Did you hear what that goddamn kid said to me?"
"To be honest, I've heard worse."
"No!" I smashed my palm against the bar. She jumped and the bartender stopped smiling. This just made me angrier. "This wasn't just some sugar rush brat bruising my lap! He knew just what he was saying!"
The elf girl looked unconvinced but what did she know? Fresh out of braces and fresh out of sympathy for some fat old geezer in a red suit. I picked up my next glass and waved her away.
"Go on. Tell them Santa won't be back today.” I stared at the half-empty glass as it shone in the weak light. “Too tired. Dead tired.”
“Really?” The girl’s tiny eyes squinted.
“Yeah.”
She gave out a haughty little huff and puff. This seemed to perk up the bartender. "Kids say the darnedest things, huh?"
Both I and the elf girl stared at the idiot. I could have thrown the glass straight at his fat head.
"The darnedest." I finished my drink. "How about 'I know you ain't real, Santa, cos I killed him last night'? That's pretty darn cute, ain't it?"
Except that wasn't it exactly. The boy had told me about his daddy's service revolver, how Santa's inside red wasn't as bright as his outside red. The devil is in the details, I suppose.
"Sounded like a dream to me," the elf girl spoke up. "You know how kids can get. Too many Westerns and War movies. It probably seemed real for him."
"It sure seemed real to me," I said. The service revolver especially. My daddy kept one around the house too. Until it went off.
The elf girl sighed. “The kid’s gone now. Long gone.”
She caught my eye. I could tell she wasn't about to let up anytime soon so I forced my ass off the bar stool.
"Come on," I told her. "Santa will tell the kids and their parents that he’s done himself. Otherwise they might not believe it."
I left behind a deserving tip to the bartender though I'm sure he would have thought a lump of coal would be better.
The elf girl crinkled her nose as she opened the door for me. "Your breath. The parents will smell booze."
"I'll probably smell the same on their's.” The girl turned away in disgust but I shrugged my shoulders. “After all, it's the most wonderful time of the year, ain't it?"
Posted by Owen Townend at 08:33