A CHRISTMAS OCCURRENCE ON THE SHOP ROOM FLOOR (a.k.a. A Festive Moment of Entropy) 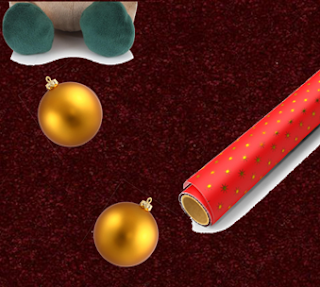 Closing time was an hour ago. Nobody is in the department store. The cleaner was in and out within twenty minutes, hastily vacuuming patches of carpet and splashing the main lino path with a damp mop. Since she left, the whole building has been very still.

Then the wrapping paper rolls rustle. The thinnest is pinched forward by the combined weight of the rest and thunks onto the square of crimson carpet beneath it. This green and white roll's bottom half raises two thicker rolls and together they tip the whole box-stand over, everything spilling out.
It all tumbles a short distance to the base of the large Christmas tree by the tills. Three low-hanging golden baubles dislodge themselves from the feeble plastic branches and roll far to the left.
One clatters against another then another until the last bauble stops in front of a motion sensor Dancing Reindeer. It shimmies its automated hips, triggering a chain reaction of shimmying until all the surrounding Reindeer have broken out into a muffled poor-quality version of Jingle Bells. They echo each other and fill the store with life, albeit artificial. Just as soon as it begins, the song is over. While it lasts, it plays only to decorative snowmen and caricatures of Santa and his elves on chocolate selection boxes.
The security camera won't get a clear view of the spectacle as it happened, just a black-and-white recording of a couple of baubles and the stiff mass swaying of the Dancing Reindeer. The magic of the instant will be overlooked by the mess.
But it has happened. It all has happened in a glorious moment of unexpected life the Monday before Christmas. The staff will tidy it up eventually, sell all these brightly-coloured trinkets and decorations at discount rates. Except these will be mispriced, the department store cheating themselves out of their true worth.
Then again what is the cost of such a Christmas occurrence on the shop room floor?
Posted by Owen Townend at 04:33