We have a masterpiece of a mantelpiece.

Varnished mahogany. An oceanic curve to the top, a tasteful woodcutting at the bottom. A lamb in the arms of a little child.

We can never agree on the genders.

So it's a big broad mantelpiece: plenty of room for all kinds of ornaments. We are just mad about figurines.

Christmas comes and we usually have some new ones to put up.

This year was a bit outre: a tartan chicken and a black and gold painted egg.

Now the irony isn't beyond us: we've both had philosophy classes in some fashion. As well as decor.

And yet neither of us have set up either ornament. Why?

The egg was a gift from my mother.

While I have adopted the chicken from my quirky work colleague.

I was going to put up my egg first but then I'm not a huge fan of the chicken and certainly don't want that up as the last ornament of the year.

And I have a funny feeling about that egg. I can see a definite crack down the middle.

I just think it'll cause havoc on the mantelpiece when it breaks.

Not this again. And what's wrong with my chicken?

You know what. I distinctly remember you moaning about it too.

Nevertheless the fact remains that it is the last day of the year and we both agree that something ought to go up.

To mark the year.

And we were wondering...

What would you advise?
Posted by Owen Townend at 11:22 No comments:

NO WORDS NEEDED (a.k.a. An Ironically Verbose Appraisal of Wordless Picture Books)

2018 has brought me a new hobby. I have started reading picture books.
I know. A grown man, a bachelor with no children of his own, likes to pick up and flick through books meant for toddlers aged 3 and up. At best: strange. At worst: creepy.
However my eye is drawn to what my eye is drawn to and my eye is mostly easily drawn to excellent drawings. Brilliant brushstrokes. Incredible colour. In short, art.
This is my next revelation: picture books are an art form and that ought to be appreciated by a wider audience. Of course, they're primarily meant for the development of babies but I should say they have appeal to adults too. What better way to encourage a parent to read to their child?
And yet, here is my third peculiar truth: the picture books that I have most enjoyed are the ones that I don't actually have to read.
There is a trend of rising popularity in junior fiction at the moment and that is picture books without words. Picture books in the purest form.
Below are three fine examples and a succinct exploration of why I find them so particularly charming... 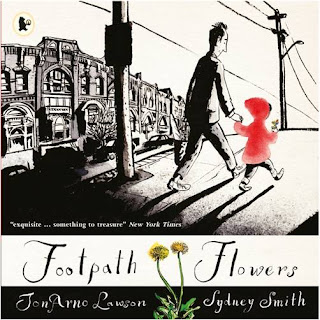 My first official wordless picture book.
A very simple story. A bright little girl in a red hood (coincidence?) is walking home with her father who is preoccupied with his phone. In fact the whole town seems preoccupied and dull for it.
And then there are flowers. Yellow footpath flowers that our young friend uses to bring a little colour to the washed-out busy world around her.
As such this is a perfect springtime book and it certainly made me smile. The unfurling of good will was subtle and creative with such touching pictures as below.
Quite frankly words would have spoiled this journey as they seemed to have already spoiled the world that this little girl lives in. If nothing else they hardly seem to matter much.
Vibrancy and creativity are of far greater importance. After all we don't have enough of it in our own world. 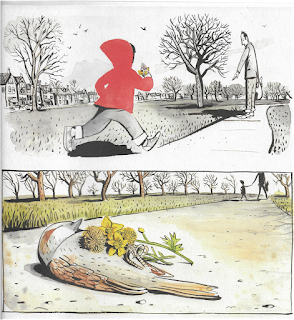 A STONE FOR SASCHA by Aaron Becker 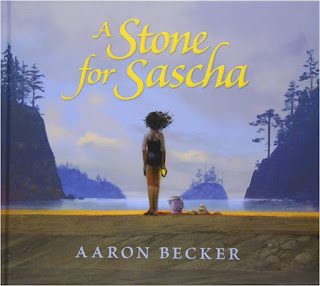 We move to the beach now. To a stone. To a broad but gorgeous history lesson.
In fact there are two stories to this book: the first of loss which is handled very sweetly. A little girl's dog passes (presumably the titular Sascha) and her whole family is heartbroken though not as much as her. The impression given is that she doesn't quite know how to act on this feeling.
Then she finds a golden stone. We are flung into the past to see this stone's journey throughout history. It's a destructive one from fallen meteorite to numerous fallen civilisations. There is plundering and wreckage. And yet the glow of gold remains in the picture. It survives all that to find its way to a lost little girl on a late summer's day.
I would venture that this is a surprisingly complex tale for children. Then again that usually means that it's the kind of book that parents can learn from too.
Death is difficult to process but so is life. Neither is permanent but what remains in between should be cherished. 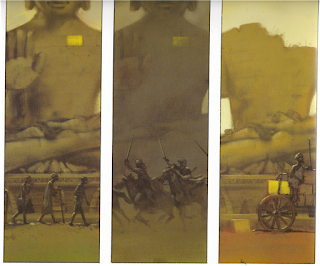 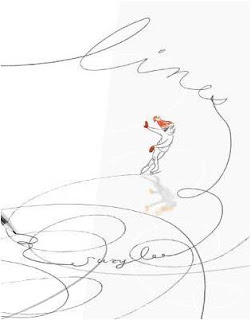 Here we are at last at winter. Or is it?
Compared to the previous two books, this is a minimalist tale of black and grey lines on white pages with a little ice skater at its centre. The only splash of colour is the red of this skater's hat and mittens.
However, look at the curves and loops that that little skater leaves behind. Look at the criss-cross of thick and thin lines and the gradual, beautiful mess.
It may not seem like much but that becomes necessary to the ending. For this is not just a day on the ice, it's a gentle musing on the magic of imagination.
As it reads in the blurb: 'It starts with a line. Whether made by the tip of a pencil or the blade of a skate, the magic starts there.'
Again this can be read as both an encouragement to children and a reminder to adults. The white page may be daunting at first but don't worry too much about making a mess. You'll get there in the end and you certainly won't be alone in it. 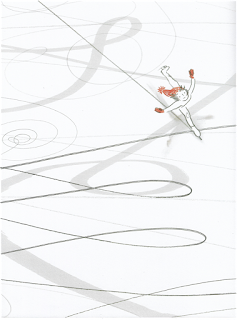 As you can see there is a broad potential to such books.
In a way it saddens me that we don't have such picture books for adults. We do have comics and graphic novels though these still largely rely on a balance of pictures and text which can sometimes eschew more in favour of words.
As for animation, that is a wonderful experience too though it takes some of the imagination out of the process. As I flipped through these books, my mind was allowed to wander and then to focus on the subtle crafty details left in by the artist that are open to interpretation.
Nevertheless, in the interest of easing young children into the sometimes baffling world of reading, such titles are a great starting point. These books are there to help with dyslexia and other learning difficulties that might impede language acquisition. These books are there for slow learners. These books are there for parents. These books are even there for strange blog writers.
These books are there and I do hope people realise.
Posted by Owen Townend at 06:40 2 comments: