LOBSTERS GROW THROUGHOUT THEIR LIFETIME (a.k.a. A Late Crustacean Poem for International Women's Day)

The girl scrunched her nose at
the hatchery, the fishy smell.
Her mum led her inside.
Aren't lobsters interesting?

A tank filled with dirty water.
Those aren't mud flecks, Mum said,
Those are babies.
Lobsters grow throughout their lifetime.

The next tank had fewer flecks
and the one after that had things that looked like lobsters.
The girl stared at the curves of their shells,
the curves that would be their pincers.

They arrived at the nursery,
large lobster mothers sheltering busy babies
crawling back and forth beneath stiff, still figures.
Mum drew daughter close.

The last lobsters were huge, one per tank,
men in aprons standing over them.
Occasionally an antennae twitched,
a pincer closed and opened.

The girl gripped her mother's hand
and they hurried out together
past cartoon lobsters collecting donations:
a pound each for the privilege.

At the car, the girl touched the window
while Mum watched, hand on the key,
wondering just how big they would be
in half a century.
Posted by Owen Townend at 15:33 No comments:

PLUNDERING THE PUN (a.k.a. Why I Say Some of the Silly Things I Do)

Puns may be punishment but certainly not for the pun issuer.

Usually I pun and it is tolerated. My friends and family appreciate me in spite of my puns.
However I refuse to pun-der to their pleas to stop or be serious or get a life for goodness sake.
To pun is to keep the mind active and the senses alive. To pun is to a solve a riddle within yourself by creating a riddle for others. To pun is to create.
This is how I plunder the pun...

I rise in the morning with an unexpected word on my lips. Today it is 'vestibule'.
I have obviously been walking hallways in my dreams again. This single architectural word is the true remnant of my last thoughts before waking. If not then it is a grip for lucidity, slowly pulling me out of my unconscious mind.
Nevertheless normally I will forget this word and the importance I have imbued it with by my second spoonful of cereal.
I then go to work and spend an entire day listening to people: colleagues, volunteers, customers, passersby. By 4pm this is more like half-listening.
Where my professionalism flags, my word play is emboldened. I listen to stories and parrot extracts. Specific words.
Most recently a volunteer was talking about Singapore noodles and said that she would see me the following week 'bright and dandy'. The noodles disappeared, the brightness dimmed but Singapore Dandy remained.
When a pun starts to form, it strikes me as a half-remembered tune. I vocalise the lilt, focus on consonant sounds (plosives being my firm favourite) and search my memory for a rhyme.
Singapore Dandy, while running through me like a little dance, does not lend itself to a rhyme. Instead it becomes the nom de guerre of some eccentric Asian gentleman criminal, possibly a master thief. This is another effect of the pun: if it does not lend itself to a turn of phrase, it tends to lend itself to a spiffy compound noun.
This pleases the writer in me. Singapore Dandy gets jotted down for a future project along with the likes of King of Nosmo and Xeno-Zine.
King of Nosmo comes from staring at a 'NO SMOKING' sign till the letters jumble into a real word and a fantasy land. It is a lazy anagram created by squishing two words together, slicing them a different way and then swapping the halves around.
Xeno-Zine comes from realising that I am people-watching, that xeno is Greek for 'a stranger' whom I am watching and that the sound of the 'X' is a 'zee' like the word 'zines' that is currently in my head because of a lyric in Flagpole Sitta by Harvey Danger that I am also obsessed with because of the way it sounds. Xeno blends with Zine into the amusing image of an alien fandom press obsessing over that strange little race called humanity.
Now I won't lie: sometimes such compound nouns just sit on my mobile phone memo for months. Some titles seem brilliant until I realise that a story doesn't necessarily follow.
The trial and error of such punning continues at the end of my day when I wash away my weariness. Before I step out of the shower, I randomly write a word pairing in the condensation.
One of my recent favourites is Confabula Rasa: a blend of 'confabulation' and 'Tabula Rasa', based on their shared 'abula' sound.
Normally such word pairings are quelled with a squeegee. Puns aren't meant to last forever. This invention in condensation is merely a way of keeping my mind agile and alert during a time of day when there are only a few hours left before sleep. This tends to be my regular window for writing.
Spontaneity kick starts imagination and so a random word or combination of words could well lead to something more tangible.
However all this is at best whimsy or at worst Clang Association. The real trick lies in how best to filter and share such wordplay with the world.

People who have heard my puns will generally agree that I should have put more thought into the practice, perhaps enough to know to refrain altogether. Nevertheless I go through a rigorous process of examination beforehand.
When I am out with friends and a word association occurs to me, I might well just say it then and there though usually taking a little time to get the wording right. This is step one.
Step two generally occurs when I transfer my findings to paper. A joke requires suitable balance and, if possible, tricky wording. For instance it took me a good ten minutes to nail down the structure of the following joke before posting it onto Twitter: 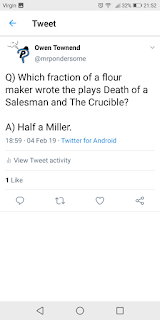 My initial concern was making sure that the context was sufficiently laid out for anyone with even a cursory knowledge of the playwright Arthur Miller. Creating the pun itself, in hindsight a terrible stretch, took a fraction of the time it did for me to make it work as a payoff.
Step three is, quite simply, good taste. Is the pun about a recently dead celebrity? Then no thanks. Is it ridiculing a particular social group that already has to deal with thoughtless jokes about them? Not worth it. Racist? Nope. Sexist? Refused.
Puns are not about pun-ching down. If anyone has a chance of seeing any of the puns I share on social media, I do not want to give the impression that I am tactless. Just 'not funny' is quite enough.
Step four is for anecdotes. If possible, I thrill at besmirching shared wisdom that I think borders on the cliché.

The verbs are swapped. The meaning is now upbeat. It doesn't quite work. Good.
This will make the reader or listener think about the platitudes they hear every day. This may also encourage a similar mindset in them. We seriously don't question adages enough.
Step five involves making the pun a basis for a story.
Some time ago I wrote down The Curse of Cures observing that 'curse' and 'cures' are anagrams of one another. It also sounded like a title.
So I wrote a story around it, about a detective turning his keen perception onto his hotel bathroom. The title still sits atop the story like an awkward hat and may soon be replaced but it remains the basis of a much greater creative process. A little thing I mouthed to myself eventually became a 280-word light comedy with a fun unreliable narrator, something which might well not have ever existed otherwise. The pun title may not exist for long but, in this case, it begat a fiction that isn't so easily dismissed with a snort.
Every great fiction or non-fiction has a pun rattling around somewhere inside it. Every astute observation of life owes its proliferation to what is essentially a joke that is barely deemed a joke.

Why I Even Bother

I won't lie: there is a sadistic streak in me. It amuses me to baffle another, even momentarily, and I have learnt to accept groans as positive reinforcement in this part of my life. However puns mean more to me than this fleeting instinct to torment.
I have a lot of nervous energy within me. I look at weeks not as weeks but obstacle courses where the trip hazards far outnumber the safe ground. I fret about small things and dread facts and dates that cast a far longer shadow.
In the time around such events, there isn't much that eases the tension other than puns. They provide distractions from the momentary to the elaborate, occupying my busy mind with semantic entanglements of my own invention. Puzzles not of my own creation would struggle to hold my interest: the concept must be one that engrosses me completely.
Where books fail, puns deliver. Where attempts at writing seem impossible, puns at least stand a chance.
Quite simply when I am nervous, I pun fast and relentlessly. When I am relaxed, I pun too though the humour is better adapted to listeners other than myself.
I may not be able to chart the exact moment in my life where punning became so important but it certainly is now.
I do it on phone memos. I do it on Twitter. I do it in the fiction I write. I do it in earshot of those who may or may not appreciate it.
I am a pun-ter for both the cheap laugh and the logical hurdle. I like to think of myself as a pun gent who, from time to time, is pungent.
I won't pun all the time but I shall never give it a rest. Nor should you.
Play with language. Make words amuse you. Try your hand at witticism.
Don't shy away. Be a pun pundit like me.

Mr Pun-dersome
Posted by Owen Townend at 13:50 No comments: