TRAUMA FROM THE SHADOWS (a.k.a. Cheeky Fan Fiction Celebrating Eighty Years of a Certain Caped Crusader) 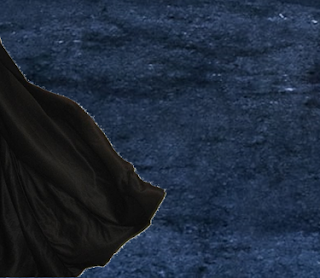 The dark figure hid around the corner. His black gloved fingers pulled away from the brickwork, dust having accumulated on the tips.  The Gothic architecture usually looked so distinguished from afar and on high but the foundations were a damp crumbling disappointment.
The voices picked up again. Two large men in a nearby alleyway at the back of the cinema.
“Guy with the ring on his pinkie,” one spoke up.
“Blonde widow’s peak?”
“That and the ring on the pinkie.”
“Yeah. Looks kinda like Uncle Herman...”
“Hey!” A slap on the forearm. “Don’t make this personal, stupid.”
“What? Herman wasn’t related to us or nothing.”
“Still weird.”
“This has to look good. We grab him, drag him to the van, take him far away and get the stuff out. Can’t do that if we’re thinking about dad’s work buddies.”
“Okay! Okay…”
The figure clutched his cape close around him. He wanted this to look good too, didn’t want to just jump out at them. His next few movements needed to have a certain grim gravitas. This had to put the fear of God into these thugs. He regulated his breathing until the doors opened up at the cinema.
“What is this?” a new sophisticated but startled voice rang out.
“Get down!”
“On the floor!”
“These are new pants!”
“Oh, wah!”
Time for the reveal. The figure rustled his cape as he dashed out of the shadows and into the centre of the alleyway. Only then did he throw it open revealing his all-black costume and rapier.
Criminals and victim alike gawped at him. They squinted. One of the thugs reached into his jacket pocket. Before he could take his hand out again, the figure rushed forward and slashed it. Feeling the accomplice draw close, the figure elbowed him out of the way too.
“Hey! This ain’t…”
The figure stabbed the thug in the foot. The other abductor had lunged hopelessly, still clutching his bloody hand, and the figure kicked him away as he pulled the rapier loose. He pushed the screaming criminal down on the floor too, holding the blade to his throat.
“Don’t even think about it,” the figure snarled.
“I wasn’t going too!” The man was on the verge of tears.
His accomplice grabbed the figure from behind before receiving an elbow to the gut and stumbling to the sidewalk. He was out cold. Meanwhile the other thug limped away under a flickering street lamp.
“Oh…please…please…”
The figure turned to the victim. He looked shocked beyond belief, reaching out for the thug just gone.
“Leave!” the figure said. “Now!”
The victim frowned. “Not a chance!”
The figure double-took. “What are you doing? You’re safe!”
“This was a consenting act, you weirdo...asshole!”
“What?”
“I hired these boys to rough me up.”
The figure hesitated. “Why?”
Now seething, the victim took a moment to reply: “This was a consenting act!”
It took a moment for the figure to realise just what was going on here. Still, in that case, he didn’t think it right for the man to be calling him the weirdo asshole.
The man jabbed his finger. “You know what? I’ll sue you! This was consensual!”
The figure stepped away from him, grimacing. He turned, forgetting to sweep and flourish his cape.
“I’ll sue you, Banderas!” the victim cried out.
The figure froze. He clenched and unclenched his fists. He reached for his utility belt. He turned back around, holding a bomb in his hand. Suddenly the man fell silent. Throwing it down, smoke rose almost instantly. While the victim coughed, the figure ran away.

He weaved through the surrounding blocks, clinging to the shadows, following the less occupied streets. So many suspicious people and interactions and yet he couldn’t stop. He took out his phone.
A mile or so along, he was met by a limousine. He jumped inside.
"No cuts I trust?" the driver, a thin elderly man with a pencil moustache, asked.
The figure ripped open his shirt to check. "Not on me."
"If only the same could be said of tonight's criminal element."
"They're fine."
The driver gave him a pointed look via the rear-view mirror: "That is blood on your rapier tip."
"Just drive."
The figure ducked down in the plush leather passenger seat, peeling off his black mask. He smoothed down his sweaty black hair and sighed. "Alfred? I lost it. For a moment. Control."
The driver shook his head as he accelerated uphill and out of the city.
"You would stand outside the cinema. You would dress up as Zorro."
"I am not Zorro!" the figure snapped.
"Then what are you?" The driver raised an eyebrow. The figure pouted then tried to disguise it with a nose wipe. The driver sighed. "Bruce," he said, "What were you expecting? Another boy and his parents? A repeat of your own trauma? Your own personal hell? Speak honestly now. Would you actually be able to act in such a moment or would you...succumb?"
Bruce didn't make eye contact. He refused. One single admission and here he stood accused all over again. Well, he wouldn't say anything now. He wouldn't mention the embarrassing turn of the apparently sexual scenario and he certainly wouldn't leave himself open to more snide remarks. He would also keep the rush, the righteousness of running lesser men through with a barbed idea, purely to himself. Bruce smiled as he recalled the sound of grown men screaming. He heard 'Banderas' again and thought about that phony victim screaming too.
Alfred cleared his throat: "Another thing, sir. One of the windows has been smashed."
Bruce thought of hoodlums with bricks in their hands, hurling them at the millionaire's house. As pathetic and cowardly an act as it was socially inevitable.
"Which window?" he asked.
"The study. By the fireplace."
Bruce dug his gloved fingers into the car door armrest. "And the bust?"
"Intact." Alfred replied, pulling into the drive. Switching off the engine, he turned back. "It was a bat of all thing."
Bruce stared out at his manor. If he squinted, he could just about see the break from here.

Posted by Owen Townend at 13:43 No comments: