TODAY AT A CAFE (a.k.a. A Nonfiction Experience from Actually a Few Weeks Ago Now) 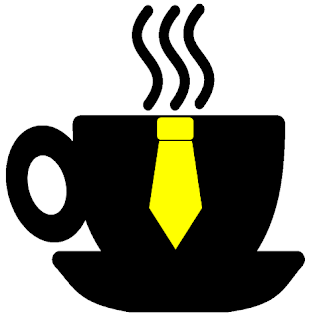 The café was all black granite top tables with padded white stools and booths that were difficult to slide into from the eyesore diamond tile floor. Still, it was clean. As I approached the main counter, the man behind it spied me as I passed by an interior design topiary.
“Hi there,” he began. “Today we have a special deal on curry and rice. You can buy the Jalfrezi, Tikka or Korma for just £6.”
I nodded along as he showed me the contents of each steel container on the heated display. I looked back up and said, “Can I order a hot chocolate please?”
He gave out a whiny little laugh but turned towards the steamer behind him. “Is that with whipped cream?”
“Yes, please.”
“That’ll be £2.80.”
As I passed him a fiver, a skinny waiter with a fat yellow tie stopped beside me.
“Bored,” he announced. The man behind the counter grinned in response. The waiter caught my eye. “And how are you today, sir?”
“I am fine, thank you. How are you?”
“I am well. As well as I can be working with this kidder over here.” He gestured at the man behind the counter as he handed me my change. They both giggled. “And what will you be doing after your drink, sir?”
“Go home.”
The waiter nodded. “Do you play computer games?”
I hesitated. “Sometimes. Not as much these days.”
“You look the intelligent sort. Would you say you’re intelligent?”
I frowned but laughed it off. “That’s not really for me to say.”
This was not the most comprehensive of answers. I waited for the interrogation to continue but then the waiter turned, apparently called over.
“Sorry about that,” the man behind the counter said.
“That’s all right,” I lied.
I sat on the opposite side of the topiary, using it as a green leafy window to the only other customer in the building. She tucked into a panini, knife and fork tearing through the thick bread. Her eyes were damp and she had to stop a moment to wipe away the tears. The waiter appeared with fresh napkins for the table which he handed to her personally. Her wedding ring glistened in the light as she touched one of the stiff brown sheets to the corners of her eyes.
"Poor dear," the waiter muttered before moving off in the direction of distant clattering crockery.
I felt bad for looking at the woman so I stopped. Nevertheless, she watched me carefully until she finished her panini.
The man behind the counter came to bring the hot chocolate over to me himself. There was a small biscuit on the saucer. "No extra cost," he said with a smile before returning to his post.
I then took out my phone and lost myself in my emails. Halfway through my hot chocolate, I heard the waiter reappear at the counter.
“Bilal's got a chicken bone in his throat," he told the man.
"Is he choking?"
"Go see for yourself."
The man came out from behind his counter once again, this time in a definite rush. Barely a minute later a short woman with a beehive hairdo arrived to take his place.
"How are you today, sir?" she asked me. I gave her a thumbs up as I crunched my biscuit.
Raising my phone again, I finished composing my last reply then emptied my cup. I left behind a small crumbly corner of the biscuit. In the meantime, the man had come back and he, the woman and the waiter were all busying themselves behind the counter, all getting in each other's way.
"Thank you," I said. None of them turned to me. A little flimsy wave and I was away, out of the door.
I'm afraid I didn't have the wherewithal to compose a thorough review at the time. Something tells me this here will suffice.
Posted by Owen Townend at 10:00