SEASONALLY-AFFECTED (a.k.a. A Chilling Transition for Halloween and Autumn) 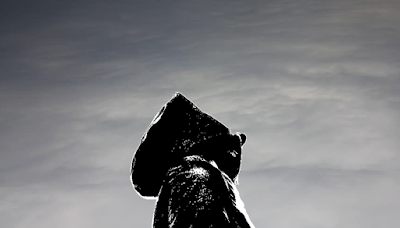 When he wakes up and it is dark outside, he knows it could happen. He feels it spread from his chilly toes, up his achy legs till it bursts in his chest which coughs and splutters accordingly. Sometimes it’s just a cold, a flu maybe, but he knows at this time of year that it could be so much more. The world-weariness of a full year now keeps him prostrate on the bed.
Still he resists and moves, feeling the cold as he crosses his bedroom for the day’s clothes. He dresses quickly, avoiding touching skin against skin and the cold sensation that brings. He adds another layer of clothing and then another layer on top of that, just in case. When he is numb to the frost that has crept through his window overnight, he parts the curtains and raises the blinds. A grey lumpen sky fills his vision.
After a perfunctory breakfast, he sets out. He sidesteps slugs and snails on his porch to get to sparkly frost patches on the long path to work. It is dark so he needs to be careful and watch out for anything that might come up.
He keeps glancing skyward, not able to tell if the clouds have shifted position or even broken. The monotone of winter is particularly oppressive when it is still technically autumn. Nevertheless, the atmosphere isn’t quite cold enough yet for anything to fall. He does his best to enjoy the crispness of the air while keeping his hands covered and safely tucked away.
On he goes, over vales and hills, along main roads with cars few and far between but speeding as if black ice weren’t a problem. When able, he takes side roads with few pedestrians crossing, shortcuts where he can still be alone. If he sees trees upcoming, he steers well-clear in case a sodden leaf should tumble down from the bush and take him by surprise. He knows he should wear a hat; it would certainly keep his ears warm but then he wouldn’t feel anything that might land on him. The very idea of pulling off a hat and feeling foreign moisture there is quite unsettling.
He perseveres until his path finally ends and he stands in front of his work hut. He kicks his boots against the porch step just in case he has waded through any puddles without realising it, before pulling out his ring of keys. He tries the front door key but it will not turn, as if water has entered the lock and frozen overnight. With a little force, he manages it though the sudden action leaves him oddly light-headed. As he depresses the handle, he barely notices the tiniest touch to the back of his neck. It drips down and he knows that’s it. Snow has fallen on him at last.
The door clatters open. Stepping inside, the warmth drains from his face. Embracing the cold, he becomes a part of it...