A WRITER AND A WHOVIAN (a.k.a. Why I'm Suddenly Writing Doctor Who Fan Fiction and Other Stuff) 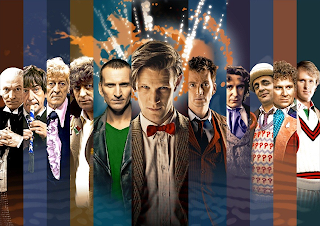 A cantankerous grandfather, a lovable space hobo, a suave scientist, a bohemian with a long scarf, a naive cricketer, a brash cynic, an 'r'-rolling schemer, an Edwardian-garbed romanticist, a leather-wearing tough guy, a skinny charmer and an excitable bowtie enthusiast.
Sounds like a right old team. Except all that describes one man. A Time Lord to be precise. A genius, a hero, a madman with a time-travelling box.
Now I know everyone is talking about the Doctor this month, it being Doctor Who's 50th Anniversary, but I still want to weigh in with why this particular writer chap is a true blue Whovian. I might even explain how the show has influenced my writing, namely my choice of subjects and style but that depends on if I actually stop gushing with fan boy love first.

So let's get the preliminaries out of the way for all you people out there who haven't ever seen a single episode of Doctor Who. The Doctor is a Time Lord from the planet Gallifrey who travels around space and time in the TARDIS (Time and Relative Dimension in Space) which just so happens to look like a blue police box because its Chameleon Circuit jammed in the 1960s and hasn't been fixed since. The Doctor has battled and occasionally reasoned with Daleks, Cybermen, Sontarans, Weeping Angels, Silurians, Ice Warriors, the Silence and many other (mostly bipedal) alien species as well as a few rogue Time Lords such as the Master, the Rani, Morbius and Omega. However the Doctor doesn't always survive the battle causing him to change his body via a process called regeneration. He is currently on his eleventh (or maybe twelfth?). Needless to say, this chap certainly complicates things: 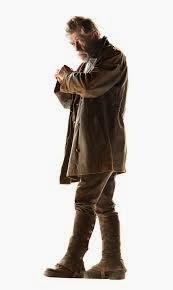 FAN BOY FAVOURITES (This Particular Fan Boy, that is) 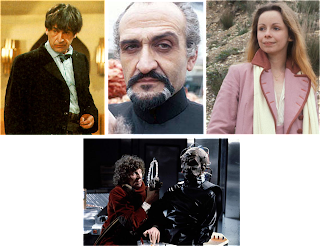 My favourite Doctor is the second (as played by Patrick Troughton) because he was daft but capable and managed to carry the show through all the controversy of recasting the titular character. My favourite enemy is the Master because his presence was frequently malevolent, occasionally helpful but always levelling. My favourite companion is Romana because she was a Time Lady and, as such, engaged the Doctor at the same level of intelligence. My favourite serial is the Genesis of the Daleks because it establishes the state of the Doctor's relationship with his arch enemies and saw the first appearance of Davros, their megalomaniacal creator. There. That should do it.

IT BEHOVES A WHOVIAN TO SAY... (Doctor Who in Relation to Me)

Anyway here's the part you've come to expect from most blogs: the borderline self-indulgent discourse on how something has impacted on moi in a thousand words or less. So here goes: what I love about Doctor Who is the very idea of the Doctor. I admit that I had the grave misfortune of growing up during the 'Wilderness Years' (1989-2005) where the only screen Doctor was played by the brilliant Paul McGann in the rather unfortunate TV movie. The concept of the show was carefully explained to me by my parents and I really wasn't interested at first. Then again very little actually did interest me at that time; I called this period in my life the 'Snobbish Years'. The one facet of the show that truly fascinated me though was the concept of regeneration: that the same character could be spread across several actors in a linear sequence seemed bafflingly brilliant. The varying characterisations of the Time Lord made me happy too because, after all, who would want to play a character in exactly the same way? The Doctor's key personality traits were that he was eccentric and a genius and, as I'm sure we all know, there is so much wiggle room that an actor or indeed a writer can have fun with there.
I'm constantly impressed with how actors walk into the role and, despite having eleven canonical Doctors and a few non-canonical ones as well, can find a niche that becomes unique to them. Just recheck the list at the very beginning of this blog post: do any of those character descriptions sound too alike? Granted I emphasised clothing as much as personality but is it not true to say that dress sense is one of the first signifiers of a person's character? If you saw a man with a ridiculously long scarf and a hat, would you think he was just another guy who works down the office? Of course not, you'd probably think he was overcompensating for a diminished sense of individuality or at least that he was slightly insane. I believe that the Doctor is always a little of both. And yet people gravitate towards him, especially attractive women in search of high adventure.
Then again one might put this to the fact that a man with a time and space machine would make a very appealing travelling companion. And yet the Doctor doesn't seem to have ever been chased into the TARDIS by a gay man or woman yet (except Captain Jack Harkness who is gratuitously omnisexual and we all love him for it). Even during the Russell T Davies era. Huh.
Anyway the TARDIS is the other main reason why I love Doctor Who. It's a spaceship but it's not a spaceship, it's a time machine but it's alive. Every Whovian fan would kill to be able to dash around the console, flipping switches and tapping buttons. They might even be tempted to stroke the time rotor and mutter 'old girl' or even 'sexy'. Yes there is blatant objectophilia involving the TARDIS but still no onscreen gay companions. Then again, is it technically objectophilia when your time machine temporarily becomes Suranne Jones? (The Doctor's Wife - my second favourite episode by my all time favourite writer Neil Gaiman. Go check it out.) Needless to say the sexual politics of the show are a bit haphazard, especially since the start of the modern series.

THE POWER OF QUIRKS, NOT QUARKS (How Has Doctor Who Helped Me as a Writer?)
Well for one thing it ignited my interest in science fiction, which then stretched out to speculative fiction which brought me to practically all that I write today. Observing the subtle characterisation of the Doctor, every Doctor, has taught me how to write exciting characters that are partly grounded in my experience whilst also being unique in a way that I personally would never attempt in my own life. The writing style of most Doctor Who episodes, most notably the dialogue, has given me permission to be quirky in ways that I never thought I'd be able to pull off. In short, Doctor Who has taught me that it's okay to be quirky and to enjoy quirky science fiction. It has liberated me from a potential life of writing stolid stories about real life, walking in the same deep footprints left by my literary forbears. Why write about the daily life of a university professor who struggles to commute between campuses when you can write about the daily life of a university professor who commutes via transferring his mind to another tutor at another campus? Both have obvious value and potential emotional resonance but only one is clearly mad and amusing.
Doctor Who; be it on the small screen, big screen, radio or book, also tends to be mad and amusing. It can also be emotionally resonant, valuable, clever, simple and so many other things. It's longevity is its constant liberation: the Doctor can quite literally have any sort of adventure, in any sort of location, at any sort of time. The potential for stories is limitless: the Doctor can visit 18th Century France eighteen times in both canonical and non-canonical fiction and there is no guarantee that all the adventures he has there are too similar to one another. This is why Doctor Who is one of the few existing television shows that I'd write fan fiction about and the only one I would gladly post on this blog. He may not be my own character but he is one my favourite characters to write for, permission or no.

In closing Doctor Who has saved the day for me in so many ways: it baffled me, entertained me, taught me and made me both the man and writer that I am today. So, if you haven't ever thought about it, why not go and watch a little of it yourself. Maybe it will baffle you, entertain you, teach you. It may even make you better.
So hats off to you, Doctor: fez, Stetson and astronaut helmet. You carry on pointing and clicking your sonic screwdriver until all those doors are open and the alien threats saved from themselves. As he himself once said in The Waters of Mars: 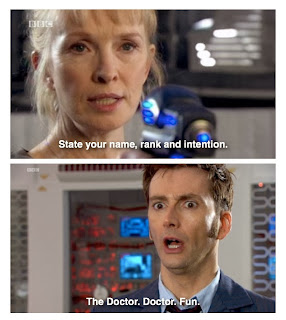