THE MAJESTY OF NATURE IN LANDSCAPE (a.k.a. A Lindisfarne Vignette) 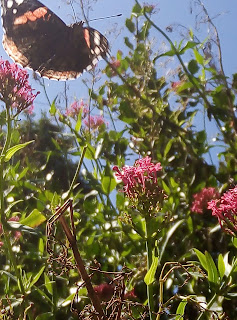 Man and Boy stopped a while to snap a Red Admiral. Boy had his phone out in seconds while Man was still fiddling with his Fuji camera strap.
"Landscape or portrait?" Boy asked, tilting his phone.
"You'll get more of the majesty of nature in landscape," Man replied.
Camera finally switched on, he pointed it at the butterfly in the hedge. It flitted off. He groaned. Boy laughed.
"Too slow," he said.
"I'll get the bugger," Man muttered. "Don't you worry."
They followed it along a stone wall. The Red Admiral stopped at every other crack, unhelpfully keeping its wings folded. They waited for it to move.
In time a procession of school children passed by: ten little reflector jackets led by one big one. The teacher hesitated, wondering just what Man and Boy were doing.
"Butterfly snapshots," Man explained with a curt smile.
The teacher nodded and moved the kids along. They were almost away before a girl at the back spoke up: "I licked one of those once." The rest giggled till they were all gone.
At last the Red Admiral set off again.
"Oh yes!" Boy said. "I got it mid-flight!"
Man sniffed. "If you would be quiet for just one second, we might catch it by those pink flowers."
Boy snapped his fingers. "Look! Quick!"
Man saw his perfect picture opportunity. The butterfly landed on a single low-hanging branch and was steadily fluttering its wings. It held them open long enough for him to take quite a few photos. Man even managed a detailed close-up of the wing symmetry. Meanwhile Boy stood beside, slipping his phone back into his pocket. He smiled at Man when he was done.
"Will that do?" Boy asked.
Man nodded his thanks to the Red Admiral. It bowed low, twitching its antennae as if contemplating him in return . Then a gust shook the branch and the butterfly followed the currant.
"Yes," Man said, tucking the camera back into its case. "That'll do for me." 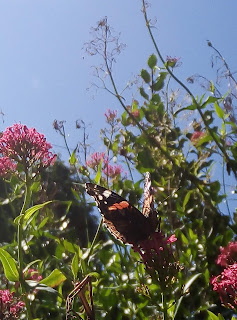